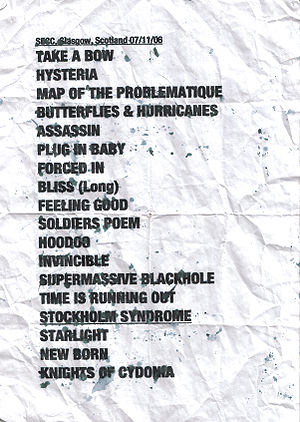 Dead Star was played during the sound check.[5] Matthew Bellamy reportedly "smashed" his guitar at the end of Stockholm Syndrome (a low quality video can be watched here) as the band left the stage for the encore.[6]

Howard performed a drum roll whilst waiting for the final balloon to be popped. One of the last known appearances of the Space Dementia outro, as the band would rarely perform it during November.

Bellamy said "Thank you Glasgow, how're you doing?" after Hysteria. After Map of the Problematique he said "Cheers", and again after Butterflies and Hurricanes. After Assassin, he said "Thank you very much ... How's it going Glasgow?" He said "cheers" again after Feeling Good.

Before Feeling Good, Howard said "we need to pop them all before we can play you see, there we go ... one more". After Soldier's Poem, he said "Thank you".

An audience recording was made, which is available in mp3 format here. This recording does not include Take a Bow or any of the encore.