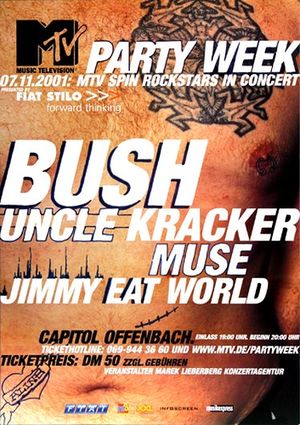 There are several breaks, notably between Citizen Erased and Muscle Museum, between Sunburn and Space Dementia, and again between Space Dementia and New Born. While only eight songs were believed to have been played, a source has proven Uno was also played, likely between Citizen Erased and Muscle Museum.[2] As well, in video, after Hyper Music, the intro to Showbiz can be heard before being cut to Plug In Baby.[3] It is entirely possible that between the breaks several songs could have been cut, Uno and Showbiz among them.