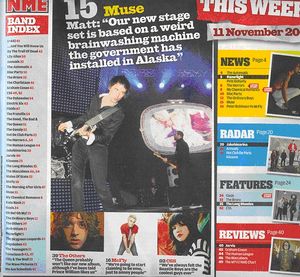 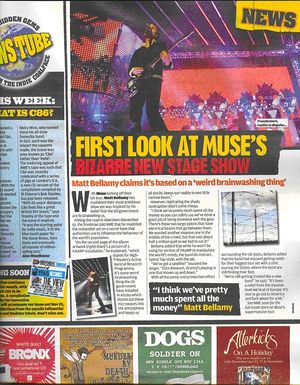 Matt Bellamy claims it's based on a 'weird brainwashing thing'

With Muse kicking off their UK tour, Matt Bellamy has explained their most ambitious show yet was inspired by his belief that the US government are brainwashing us.

Hitting the road in Aberdeen (November 6), the frontman told NME that he modelled the outlandish set on a secret base that authorities use to influence the behaviour of the world's population.

"On the second page of the album artwork (right) there's a picture of a HAARP installaion," he explained, "which stands for High-Frequency Active Auroral Research Programme. It's some weird brainwashing thing the US government have installed in Alaska which shoots out these microwaves into the atmosphere and keeps us all docile, keeps our reality in one little narrow beam."

"I think we've pretty much spent all the money so you can safely say we've done a good job of being excessive with the gear. There's these two large pylons that have electrical beams that go between them. We wanted another massive one in the middle of the crowd, but that cost about half a million quid so we had to cut it!"

Bellamy added that while he won't be using his version of HAARP to manipulate the world's minds, the band do interact, Spinal Tap-style, with the set.

"We've got a satellite!" boasted the singer, "Dom [Howard, drums]'s playing in one that moves up and down." With all the pomp and production effort surrounding the UK dates, Bellamy added that the band had enjoyed getting ready for their biggest tour yet with a stint touring the States, where the band are still finding their feet.

"We're still getting treated like a new band" he said. "It's been a relief from the massive level we're at in Europe. It's nice to go out to America and fuck about for a bit."

See NME soon for the full inside story on Muse's supermassive tour.