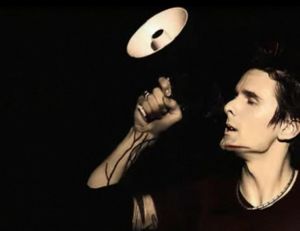 David Slade (director): "This was a double A side single, I wrote about seven treatments for Feeling Good to find that they actually needed two videos for both sides of the single."

"It seemed that performance was what was needed. We had to split one budget into two videos and so this became an exercise in invention and improvisation."

"Feeling Good was meant to be a pop performance piece, the mainstream flip side to the nasty Hyper Music. In the end it became the absolute antithesis after we cast a bunch of monsters to be in the crowd."

The video features Muse fans with distored faces and loads of cherry blossom petals. There was also a bit of the scene that was cut off which involved Matt falling down the room with a pyramid of Muse fan heads. It was cut off due to time constraints when renting the studio.

It was filmed in front of a blue screen.

You can watch it here.

Back to Feeling Good