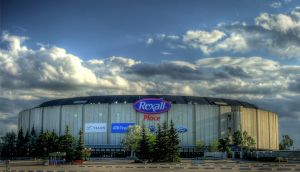 Northlands Coliseum, previously known as Rexall Place, Edmonton Coliseum and Skyreach Centre, is a defunct indoor arena located in Edmonton, Alberta. The arena was built between 1972 and 1974 and opened in November of '74. It underwent three renovations, in 1994, 2001 and 2007 and closed on January 1st, 2018, after the ownership was transfered from Northlands to the City of Edmonton. Northlands had plans of redeveloping the arena to a multi-level ice facility but the plans were scrapped after it was found out that renovating would be more costly than building a new facility. Future plans of the building are yet to be decided. The capacity of the arena reached up to 17,100. It was designed by Phillips, Barrett, Hillier, Jones & Partners in collaboration with Wynn, Forbes, Lord, Feldberg & Schmidt.

The arena was home to teams such as Edmonton Oilers of WHA/NHL, Edmonton Oil Kings, of WHL/WCHL, Edmonton Drillers of NPSL, Edmonton Skyhawks of NBL, Edmonton Sled Dogs of RHI and Edmonton Rush of NLL, to name a few. The arena hosted the 1981 and 1984 Canada Cup hockey tournaments, seven Stanley Cup finals (1983, 1984, 1985, 1987, 1988, 1990 and 2006) and the 1978 Commonwealth Games. The arena also hosted the 2012 World Junior Ice Hockey Championships. Musical artits who performed in the arena include Neil Young, Fall Out Boy, Metallica, Leonard Cohen, Green Day, AC/DC, Rush, Foo Fighters and more.