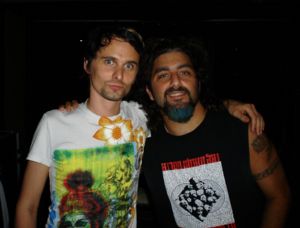 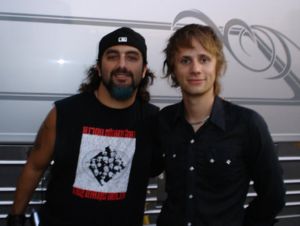 Dream Theater is an American progressive metal band formed in 1985. It is now composed of John Petrucci on guitar, John Myung on bass, Jordan Rudess on keyboard and James LaBrie as vocalist. In 2010, Mike Portnoy left his position as drummer of the band and was replaced by Mike Mangini. Both Mike Portnoy and John Petrucci have mentioned that the band are influenced by Muse amongst other acts (such as Rush) both in terms of live shows and musical arrangements.

Mike Portnoy wrote a list of his 10 favourite albums released in 2004 in which he included Absolution as the first on the list. Next to it, he wrote "(technically this is a 2003 release - but it is hands down my favorite CD of the year and probably the decade as well!)".[1]

In 2005, the band released an album called "Octavarium" on which some songs ("These walls" and "Never Enough") have a strong Muse influence (Never Enough having a very similar riffs to Hysteria and Stockholm Syndrome) - with Assassin's drum beat later possibly being influenced by Panic Attack off of the same album and Knights of Cydonia's very final riff probably paying homage to Dream Theater's song "In the name of God" off of their 2003 album "Train of Thought".

In 2007, they released "Systematic Chaos", with "Prophets of War" again resembling Stockholm Syndrome.

Dream Theater have, at least once, covered Stockholm Syndrome live, as an instrumental outro. A clip of this can be seen here.

Mike Portnoy also said in Muse-IN, a French fanzine about the band edited by Muse Messenger in February 2006 the following about Muse: "Well, I didn't hide that Muse is one of the bands which impressed me the most these last years. Inevitably, when we listen to bands during composition time, it could arise in a realtively conscious way, because that's a part of us at this moment. Sometimes people insult us while violently reproaching us for having influences, but when we're a music lover, we are inspired by things we love, anyway."