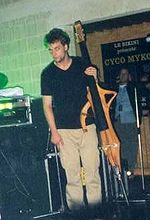 Double bass (also known as upright bass, contrabass, bass fiddle, string bass, acoustic bass and many other names), is the largest and lowest-pitched bowed string instrument. Developed between 15th and 19th centuries, the double bass is used in a variety of genres raging from orchestral music to rockabilly, rock and roll and country, jazz and tango.

The double bass comes in both acoustic and electric variants, with the electric one being a bit more size-friendlier.

Chris Wolstenholme played the double bass on several Muse songs, especially during the early days. These include Sunburn and Falling Down off of Showbiz, Megalomania and Screenager, the latter of which, according to Dom Howard, he used a hybrid between a double bass and a cello in, and Soldier's Poem off of Black Holes and Revelations.

Wolstenholme has also played the electric double bass live during the Showbiz and pre-Showbiz Tours, for Falling Down, Unintended and Sunburn. Chris is also seen playing it in the Unintended music video.