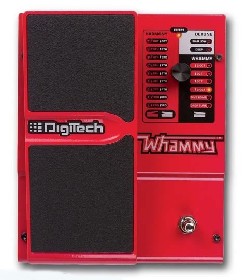 The Whammy is one of Bellamy's main effects and he uses it a lot in solos to change the pitch of the notes being played (usually up and down an octave). It can be heard when listening to the solos of Sunburn, New Born or the middle of Recess and parts of the "Grand Omega Bosses" edit of Assassin. He also uses it for the Invincible tapping solo and during the outro riff after New Born when played live. The WH4 is the reissue pedal, there have been 3 other variations of it, the original WH1 which is still used by guitarists such as Jonny Greenwood of Radiohead.

There was also the XP100 Whammy/Wah and the Bass Whammy which weren't as successful as the WH1 or WH4. Bellamy however owned a XP100 but it was never used live.

One of the strongest points about the WH4 is that it has the ability to be controlled by MIDI. Some of Bellamy's guitars, such as 007 and Bomber have MIDI strips on, and this allows Bellamy to change the pitch on the Whammy by running his finger along the MIDI strip.

Bellamy has 2 Whammys in his current rack controlled by an expression pedal on his board. For the The 2nd Law Tour he still uses one of these (a Digitech Whammy WH4) and has added a Digitech Whammy DT