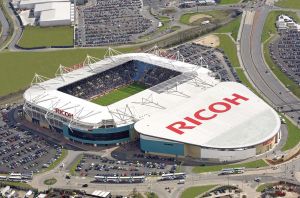 Ricoh Arena, also known as the City of Coventry Stadium during the 2012 Olympics, is a sports and entertainment complex, located in Coventry, England. It includes a 32,609-seat stadium, a 6,000 square metres exhibition hall, a casino and a hotel, aswell as the Arena Park Shopping Centre. It was built 2005 on the site of Foleshill gasworks and was designed by The Miller Partnership architectural company. The arena underwent expansion in 2010. In 2017, FourFourTwo magazine labeled the arena as being the worst stadium of all stadiums in the Premier League and the English Football League.

The Ricoh Arena is former home to Coventry City F.C. and Coventry City L.F.C. and is current home to Wasps RFC and Wasps Netball clubs. The arena hosted, amongst other sporting events, the sell-out England U21 football match against Germany in 2007, the 2011 UEFA European U21 Championship qualification Group 9 against Macedonia and the 2007 England vs Netherlands U19 in the Elite qualifying group round. The arena also hosted twelve football matches of the 2012 Olympic Games, including a preparation match between Oman and Senegal in the Olympic Play-Offs. The stadium also hosted the 2011 Women's FA Cup, several rugby union games with the Wasps, the 2013 Davis Cup, the Champion of Champions snooker tournament and the 2016 Rugby League Four Nations. Musical acts who performed in the arena include Bruce Springsteen, Scouting for Girls, Catfish and the Bottlemen, Chase & Status and Kaiser Chiefs with The Chainsmokers during the 2016 MTV Crashes festival, Bryan Adams, Red Hot Chili Peppers, Robbie Williams and more.

In 2013, Muse kicked off their stadium tour in the arena. They also held production rehearsals at the site. The production included large fireballs shooting out of the top of the stage, which confused the locals into thinking the arena is on fire.