MuseWiki, wiki for the band Muse
(Redirected from Chrome Manson)
Jump to navigation Jump to search 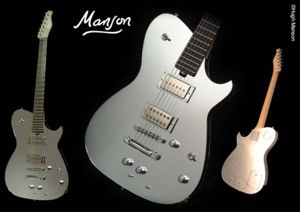 This guitar was built at the same time as the Rust Relic for the December '04 Earls Court concerts. Since then it has been regularly used to date.

At the February 18th, 2013 London War Child gig, Matt smashed this guitar into Dom's bass drum, then a few times into his on-stage Dickinson amp, and finally across Dom and the drum kit. Pieces of the mirror cover can be seen breaking off during the impacts.

The guitar was repaired with a completely new body and was back in action at the April 10th, 2013 Toronto gig. The new body had to match the new weight targets that Matt specified for his Manson guitars built in 2012 and 2013. In order to achieve that, the guitar had some holes drilled into the body, this way there's less wood in the guitar, making it lighter.

Since the start of The 2nd Law tour, this guitar had only been used for performing Plug In Baby, and whilst the guitar was being repaired, the song was removed from the setlists.

As of 2015, Matt got another mirror guitar made, the Mirror 2.0. Since then, one mirror sits in Rig A and another one sits in Rig B. The guitars are mostly the same, with the only noticeable difference being the fuzz factory pots which are further apart on the 2.0. For the Drones tour, it was mostly used in Rig A for the Americas shows, but was also seen occassionally in Rig B for the European festival shows, and since 2017, the 2.0 was mostly used for US shows.