This model is custom made for Chris. It's based on the Status S2-Classic, but differs in a few points from his forerunner:

Probably, he first played his custom model at the Olympic Closing Cerenomy. It's unknown, if this model differs from the prototype model, wherefore it's unclear if he used the signature model first-time in 2012 or 2011. At the beginning of the The 2nd Law tour Chris received, according to his tweet, three new custom basses, one of which is the Status Chris Wolstenholme Signature Bass 5-string and two others 4-string custom models. One has white-LED's embedded and a blue finish, the other one has red-LED's and a natural/black finish. The two new basses replaced the walnut and graphite Status S2-Classic basses. 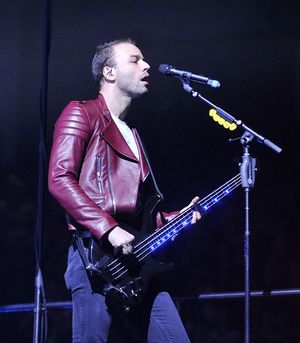 One of the first signature basses Chris recieved.

Chris used to use another blue-LED bass, which was a CW Signature prototype model. Currently, he is only using one.

The bass has first been used in standard tuning, but has also been used between 2013 and 2016 in Drop D and once in standard (at Krakow Live festival 2016). It's currently used in the half step down tuning.

(Songs played before 2011 with the prototype model are also included)

Most of the time, this bass is used for songs which are in standard tuning. On one occasion, the bass was used for Hyper Music, which is in Drop D, and during The Drones 360 Tour in 2016, he sometimes used it in Drop C on Map of the Problematique, together with the graphite finish red-LED bass aswell as Drop D on a few occasions. 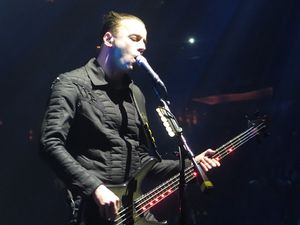 This bass is primarily used as a half-step down bass. Additionally, it was also used as a "Drop" bass when he didn't have the woven chrome bass yet. 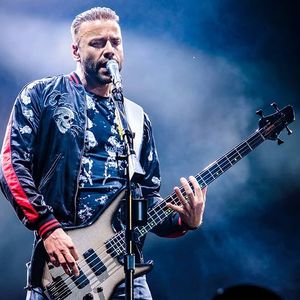 Marked in Chris's bass rack simply as "Drop", it's not set in one tuning but it's tuned throughout the show by Chris's tech according to the songs in the set (mostly used in Drop D or C). It replaced the graphite finish red-LED bass in this role and has become one of Chris's most used basses, together with the Aqua Blue White-LED one.

It was also used in standard tuning quite in 2016. Additionally, it was used in both standard and half-step down tunings for the X Factor Italy finals performance in 2018. 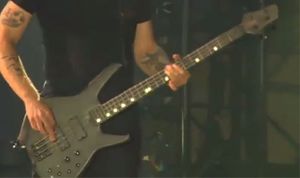 This bass was presuambly first used at the Vieilles Charrues Festival 2015.

The bass features a white-LED fretboard, but unlike the other white-LED bass this one has the matte black stealth finish. It's only been used on this gig so far and has likely been abandoned from live use. 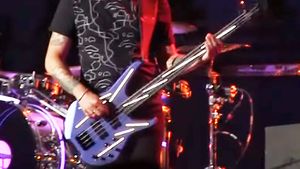 Also known as "The Lighting Bass"[1]

First used at the Prague gig on 26th of May during the Simulation Theory Tour, the bass differs from other basses in that it's fully covered with LED microstrip lighting integrated into the body and the neck. It's presumably based around the Aqua Blue Graphite bass, which was previously used on the songs he's now using this bass on.