"MK ULTRA" was played for the first time, and it was played a half-step down from the album version. At the end of "Stockholm Syndrome" + Riffs, Matt threw his Red Glitter Manson Guitar, neck first, through the top of one of Dom's Timpani. The balloons were released during "Plug In Baby".

After Stockholm Syndrome, Matt smashed his Red Glitter Manson into Dom's tympani, breaking the skin of the drums, though the guitar was not damaged. 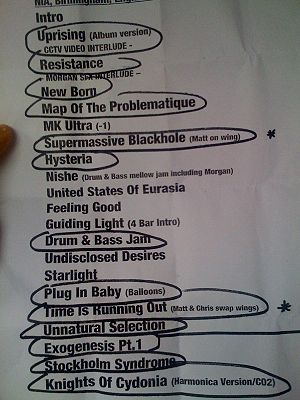